Back to all posts
Home
/
Best Practices
/
Testing framework in Salesforce

This topic describes the testing framework in Salesforce and its main features that can be utilized to ensure successful long-term development and success of the application.

When an application or managed package that you are releasing on AppExchange in Salesforce need to be deployed to customers, testing plays a key role and the testing framework makes it possible to validate that it works as expected.

It is also used to ensure that any changes and extensions to an application do not break functionality. In Salesforce, testing is required for successful deployment in production.

There are two ways of testing an application. One is through the Salesforce user interface, important, but merely testing through the user interface will not catch all of the use cases for your application. The other way is to test for bulk functionality: up to 200 records can be passed through your code if it’s invoked using SOAP API or by a Visualforce standard set controller

Features of the testing framework:

Requirements for Deploying code to Production

For deployment to a production organization, all local tests in the org are run by default. No tests are executed if no test level is specified unless the deployment package contains apex classes or triggers. Tests that originate from installed managed packages aren’t run by default. If any test fails, the entire deployment is rolled back, the framework provides a framework to create unit tests, run unit tests, run only the code that is marked as tests, check the test results and code coverage to ensure that the code can be deployed to production.

Gone live with Salesforce? Exploring what else is out there on appexchange? Available free and directly from Salesforce?Here's some recommendations to fast forward your research! Knowledge Base Dashboards & Reports By Salesforce Labs This is… Importance of management involvement It is crucial for management to sponsor the project. I have definitely seen higher …

Salesforce core cloud (Sales, Service & Lightning Platform) comes with a lot of features packed in. Over the … 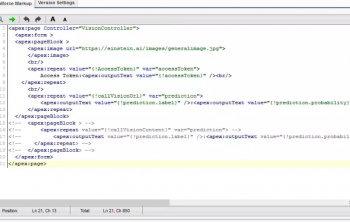 Ever been confused what kind of web content can be added to visualforce pages? Or where can you …